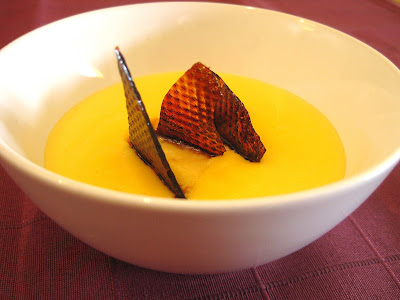 Finally, a traditional Catalan dessert: Crema Catalana It is also called crema cremada or crema de Sant Josep.
There is some small differences with the French version, Crème Brûlée, but as far as I know, the French version uses cream instead of milk, and this version is cook in a different way (Bain Marie, water bath).
The traditional presentation of Crema Catalana, looks like this, and you will need a butane torch or the typical way, un cremador.
As I don´t have any of these, I am going to show you another presentation that I found in a webpage called Cuinetes that looks very cool! The recipe is called "Crema Catalana amb trencadís de caramel".

What you need for 4 people:

1.In a bowl, add the egg yolks with the cornflour and a tbsp of milk. Beat it.
2.In a saucepan, add the milk, with the sugar, lemon zest and cinnamon stick. You can also add some vainilla flavour. Mix it.
3. When it starts to boil, remove the saucepan from the heat and let it cool down a little bit
4. Add this to the bowl with the egg yols and cornflour and keep beating all the time.
5. Sift this into another bigger saucepan at medium heat and keep beating all the time till it gets thicker. Remove it from the heat when it starts to boil.
6. Pour the catalan cream into different recipients and let it cool down. Then put it in the fridge.
7. Prepare the caramel. In a small saucepan or frying pan, add the sugar and water. When it gets a little bit brown, stir it with a spoon and remove it from the heat. Pour it in a surface with baking paper and put another baking paper on the top. With a rolling pin, make it thinner and regular. Let it cool down and remove the baking paper. Break it or shape it the way you like. Add the caramel before serving it and the Crema is cool down.

You don´t know what to do with the extra whites? Go for a Pavlova 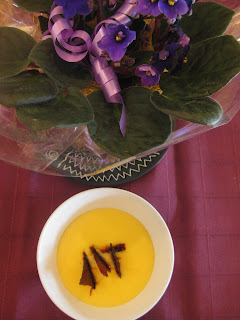