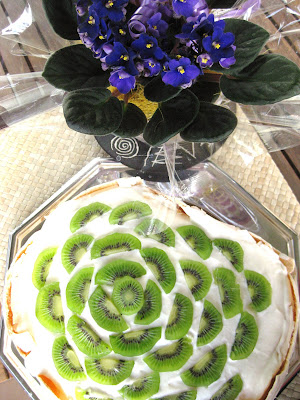 Pavlova is a meringue-based dessert named after the Russian ballet dancer Ánna Pávlova. Colloquially referred to as "pav", it is a cake similar to meringue with a crispy crust and soft, light inner.
The dessert is believed to have been created in honour of the dancer either during or after one of her tours to Australia and New Zealand in the 1920s. The nationality of its creator has been a source of argument between the two nations for many years, but formal research indicates New Zealand as the more probable source (that is what wikipedia says...I don´t know!).

Why am I baking a Pavlova? Cause I am just back from Australia!
If you want to have a look to some videos, there are some in youtube to have a rough idea (video 1, video 2)
Want to hear and read this recipe in Catalan? Vols escoltar i llegir la recepta en Català? Go to this post


What you need
For the meringue
5 egg whites
240 gr castor sugar
2 tsp cornflour
1 tbsp white vinegar
1 tbsp vainilla extract
For the whipping cream
350 ml of double cream
5 tablespoon castor sugar
+ some fruit as decoration. In my case 4 kiwis, but strawberries and blueberries are very common too.
Comment: vinegar + cornflour can be replaced by a pinch of Cream of Tartar, if you have it. The aim of all these ingredients it to make it crispy outside.
Let´s start
1.Preheat the oven at 140ªC
2.Beat up the whites (previously at room temperature) for a while. Some people add a pinch of salt here. Then slowly add the sugar while beating the egg whites.That is important, take your time adding the sugar. Keep beating all the time. When it is much thicker, add the sifted cornflour, the vainilla extract and the vinegar. Slowly and keep beating....until it holds very stiff peaks.
3.Then grab your meringue and pour it into a tray with baking paper. Shape it the way you like. I like it a little bit tall and round the sides with an spatula.
4. Put it into the oven. Reduce the temperature at 125ºC. For 1 hour and a half.
5. After this time: Switch the oven off BUT keep the cake inside the oven for 15 min. Then open a little bit the door of the oven for 10 more minutes with the cake inside. We want this cake to cool down veeeeery slowly or it is going to collapse.
6. Add the whipping cream (beat the double cream with the castor sugar previously) on the top.
7. Decorate it with fruit. Put it in the fridge.
You don´t know what to do with the extra egg yolks, go for a Crema Catalana 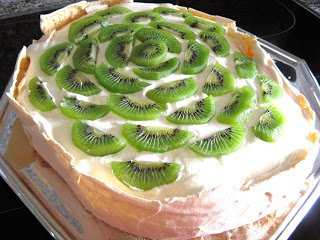 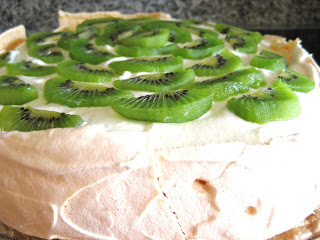