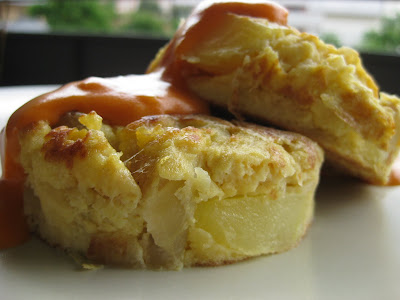 That is also called Tortilla de patatas in Spanish or Tortilla española. Tortilla in Spain is different than tortilla in Mexico. So don´t get confused.
In Catalan we called it truita, but it is the same as in Spanish. The origins of this dish is not very well-known, but what is clear is that potatoes are originally from South America.
It can be made with potatoes or potatoes with onion. I like the latter the most.
There are a big tradition of omelets and you can find a lot of different ingredients in it. The most commons in Catalonia are, truita a la francesa (just egg), truita de patates (the one I will explain it now), truita de samfaina (with red pepper and aubergine or eggplant), truita de carbassó (zucchini or courgette, normally with onions) , truita d´espinacs (spinachs), truita de mongetes (beans), ...etc.. My favourites ones: truita de patates, truita de samfaina i truita de carbassó. Yummy!
I know this is a very basic cuisine...but it is very useful and it tastes so good!

Let´s talk about the Spanish Omelet:
*As there are different interesting options, I have write them down in italics and in orange. These are quite common options that can be very useful too. 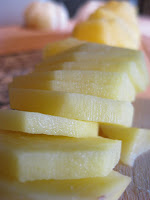 Amount of eggs or potatoes can vary a little bit. If you are cooking for more than 2 people, normally it is only 1 onion anyway.

Options: with garlic (fried), with parsley, with milk, with green pepper (fried), ..etc
There is people who also use garlic or green peppers in this recipe, and they fried them too,  and others use also some baking powder (one spoon) to get it spongier or some milk (half a glass) and they mix it with the eggs. 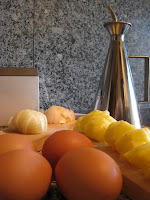 Let´s start. First peel the potatoes and cut it in slices. Do the same for the onion.
Put the potatoes in some water for a while. Remove the water.
As potatoes and onion have different times of cooking, I do it separately (in different  frying pans). Normally I cooked the potatoes in a deep fryer and I fry the onion with oil in the frying pan I will use afterwards for making the omelet.
(If you prefer a very soft omelet, don´t let the potatoes get toasted and use a lot of oil. It is up to you. There is also people that smash the potatoes too.) (Some people add some salt when frying the potatoes, I do it with the eggs, but it is a good idea too)
While frying, break the eggs and whisk them gently. Add the salt.(Some people add here some milk too) (Other people first whisk the whites and then add the yolks)
Once the potatoes are done and you have drained the oil put them together with the onion (be sure don´t forget to dump the extra oil out!).
Mix the onions, the potatoes (drained and smashed if you want) and the eggs whisked in a bowl and then dump in altogether in the frying pan with some oil ( a little!).


Then you have to be careful because the omelet easily can get stuck on the frying pan. To avoid it, shake the frying pan once in while. Also it is important to lean the saucepan back and forward while you separate it from the border. Egg will reach homogeneously all the omelet if you do it this way. The picture can show you a little bit what am I talking about. 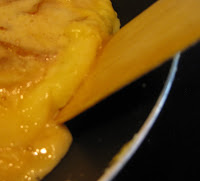 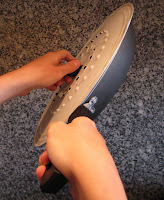 Once you think it is done (take less than 5 minutes), flip it, and shove it back in the frying pan in order to cook the other side.
And that is all. The most difficult part is flipping it, so for that be sure the frying pan is not very heavy and you have the right dish or lid and it is not slippery. I would recommend to check it beforehad. That is a clue step!
Just all very basic. I have also attached a video I found in internet that it is a good approach to see what kind of problems you can find when flipping the omelet. I told you it is the most difficult part, but with the right skills and right stuff it is a lot more easier than it looks like here! The video is worth it though. 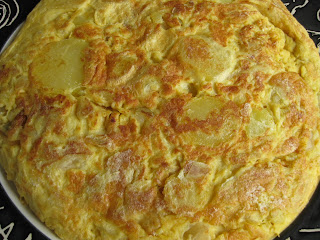 With a mold you can get the shape you want. The sauce you see is with tomato, milk and just a little bit of flour.
Enjoy and Bon Profit! 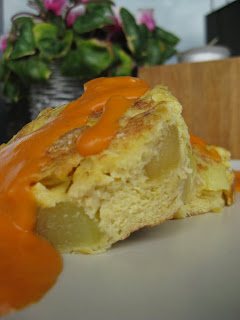